The Story of Laughing LaMancha 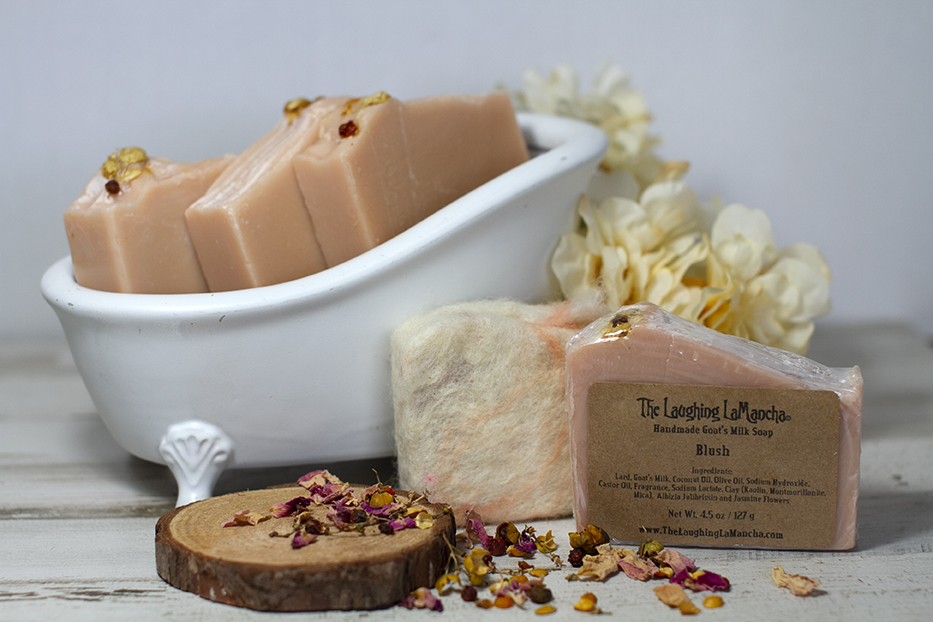 We had a dream for many years about having a little place to call our own, and it all came true! We both grew up in small communities and wanted that kind of life again. We had always wanted to be closer to nature, and provide some of our own food – especially to get away from city life. After many moves that resulted in us living in 5 different states due to Mr. Laughing LaMancha’s career, we settled here Woodville, in the Piney Woods of East Texas.

We found this wonderful piece of earth that fit everything on our “want” list – except the brush was overgrown and the woods were trying to reclaim the yard. We couldn’t even find the driveway on our first visit! It was a foreclosure property that had been vacant for over a year. Long story short, we became the proud owners of this mess, I mean place, now dubbed “The Red Tin Roof Ranch”.  How were we going to clean all of this up?

Goats! I thought! They are the ideal creature to eat 6-foot tall weeds, demolish small trees, in general munch their way to a usable piece of land. Mr. Laughing LaMancha was….neutral…on the subject of goats. He really had never been around goats. He didn’t know what he was getting into with this scheme!

I adore all goats, and there are a number of different breeds to choose from, each having their ardent fans. I did want dairy goats because weed-eating + milk is just a perfect combination in my opinion! We fell in love with LaManchas at first sight. Their most notable feature is their lack of ears! Well, they actually have ears of course. They don’t necessarily listen – but I digress. Their ears are just small, more like ours are shaped, rather than the luxurious, flowing ears of Nubians or the proud, erect ears of Alpines. Mr. Laughing LaMancha thought the ears were the coolest thing when I showed him pictures. Sold!

So, I found a doe with her young twin daughters available from a small family-owned cheesemaking dairy near us. They were so adorable! I thought these three would be just perfect for our needs! Now, at that time I did not yet know anything about “Goat Math.” They didn’t teach this in school. It probably would have better served me than Algebra has. Ha Ha. Goat Math is the resulting addiction that occurs when otherwise normal people state they are going to get “a few” goats. Like a certain brand of delicious potato chips, you can’t stop at one. Or three.

Goat Math started immediately. The very moment we were picking up our new young ladies, in fact. We drove off with an extra little buckling, that was basically thrown into our arms in a moment of weakness. Because who could say no to such a sweet little face? Welcome home, Buster! (pic)

Ok, we were going to still be fine with our original plan. Just a few goats. Alas, no. Poor Apple Blossom (the mama goat), was really lonely with only the three kids, one not even hers. She needed adult company. You can relate, right Moms?

So, off we went to get two more does that became available from the same herd. One of them happened to be Apple Blossom’s oldest daughter, Derby Pie. The other was Apple Blossom’s BFF, Rocky Road. Things were now perfect, the little herd was happy, Pansy and Petunia could grow up with their mom and aunties and brother Buster. 6 goats. Perfect. They got to munching. And munching. (pic) Shortly afterward, Mr. Laughing LaMancha told me he liked goats a lot more than he thought he would and was kind of glad we got them.

Goat Math is hard, y’all. Right before Christmas I saw an adorable little man for sale. Look at him, isn’t he precious? (pic) I mean, I could borrow a buck to breed to my girls, but really, I should buy my own, right? Go big or go home, said I! Mr. Laughing LaMancha shook his head in defeat.

So the day after Christmas, we drove to San Antonio to pick up our new addition, who we already named Buckeye, in homage to Mr. Laughing LaMancha’s home state of Ohio. And wouldn’t you know it, yet another goat was smuggled out. I really didn’t expect that. I’m a slow learner.

So, now we move ahead to the next fall’s breeding season. SomethingSomething about Birds & Bees, then next thing you know, baby goats were born! Oh my goodness, such adorableness, so many goats! So.Many.Goats. We no longer count the goats with, you know, actual numbers. Really, who cares? We have some goats, a little more than a “few.” Goat Math isn’t exactly precise, like Algebra is. I like that about it.

So, meanwhile, we now have does with babies, and they feed their babies, and yet still have lots of milk. Lots.Of.Milk. The land is flowing with milk. So, we of course drink it. Learned to make some cheese. Make some ice cream. Make some soap.  There is still plenty of milk. There will always be milk, since we have a “few” goats.

I had the most fun making the soap. I loved experimenting with different recipes, colors, fragrances. So.Many.Ideas. I gave it as gifts to family & friends. They told me they loved it and I should sell it, so that everybody else could love it too. They helped spread the word.

People did love it. Now we had some decisions to make. What are we going to call this little soapmaking venture? It needs a name. We thought about that for a while, and like most good things – it just happened. Mr. Laughing LaMancha was out snapping some pictures of the goats one day, as we do, and got this one.  (pic) We loved it because Derby Pie looked like she was laughing. Goats are very happy. Goat Laughing. Laughing Goat. Laughing LaMancha….sounded like the perfect name for a little soap company run by a crazy Goat Lady, her ever-patient husband, and “a few” LaMancha goats.